My puppy is out of control

There are some issues that most new puppy owners have to deal with. And how to deal with a puppy out of control, and very often particularly in the evenings, is one of those common questions.

The regular bite inhibition advice generally works very well with puppies, but often in the evenings, they have their "mad 5-minutes" (or more) where there seems to be no reasoning with them at all. They seem to go mad, biting and pouncing and no amount of calming them down, distracting them, do some training or putting the bite inhibition training to work seems to make much difference.

Now puppies need a lot of sleep and it's important that they get regular resting times during the day, in particular in busy households where the puppy seems to be on the go all the time as well. So "Down-Time" is important for them. I generally put them in a crate for an hour after each meal, or at least for a couple of hours at lunch time... otherwise you can end up with a manic, hyperactive and difficult puppy simply due to over-tiredness.

But this doesn't stop the mad times entirely that puppies have sometimes. Now, I am not saying that you need to stop the puppy having a run around or even to stop the "mad 5 minutes"... it's a perfectly normal thing. But if the puppy's biting goes out of control and the puppy doesn't stop at all, then it's time to teach them to calm down and settle... and this is what this blog post is about.

I have recently had a question about exactely this issue and with the permission of the owner (with no names of course) here is our email conversation that new puppy owners might find helpful to deal with this particular issue:

I wonder if you can offer me any advise regarding our puppy. We are getting on quite well with his training and he is doing OK during the day.

In the evening he seems to get more and more uncontrollable, jumping up and over-excited. The problem is that his unwanted behaviour is directed towards me and he is biting me, has even drawn blood on my arm this evening. He does not exhibit the same behaviour towards my husband and my son.

I have tried the high pitched yelping, ignoring him, then putting him somewhere else, taking myself away from the room, and the stern "no". Please can you offer any advice? I have not been angry with him and do want to retain the reward based behaviour approach but am finding this very difficult.

What you are describing is in fact quite normal puppy behaviour, however, it does of course have to be dealt with.

When he starts biting like this (the sort of out of control behaviour that you are describing), then I would put him in a crate or behind a baby gate for a good while - possibly as much as half an hour or an hour: not as a punishment but to calm down and to sleep. Chances are he is doing it because he is overly tired and/or over-stimulated.

If this period always starts at around the same time, then you could preempt it by putting him into a crate/behind baby gate before he starts or you could try to do a training session to break the cycle.

But once he is in that mode, he needs time out to calm down, relax and settle. And he also needs to learn that this behaviour is not acceptable and that it will result in withdrawal of attention for him.

I can tell you that this period will pass, but I know that it is frustrating to deal with this at times.

Thank you very much for your email.

We have been isolating my puppy when required, but clearly not for long enough, certainly not as much as half an hour. Do you have a view as to whether it is better for him to be in a separate room? His pen is in the living room at present where there is likely to be someone from the family, but I could shut him into the utility room where he will be alone.

I had been concerned as to why it is me that his biting etc was directed towards, but I think it is probably because I do more with him than the others. I will try the longer period this evening and let you know how we get on.

It isn't the isolation we want as it's not punishment!; it's not strictly a time-out, more like some down-time if you like to get him to calm down and settle. So the pen in the living room is perfect.

Also don't put him in there angry or annoyed, but in a calm manner like you would with a baby saying something like "Oh dear, we are a bit overtired, aren't we, let's go and settle down for a bit!"... If you like you can give him a stuffed kong or chew toy in there.

Puppies do tend to pick certain people to "practice" their biting on. It is usually because they get more of a reaction from them than from others, hence why children are often the target...

Thank you again for your advice. Last night we put our puppy straight into his pen once he became over-excited and biting rather than trying to calm him (which doesn't work!), and left him for longer than we had before. We also all agreed to be much calmer with him in the evening, rather than playing or training. I am pleased to report that we all had a much more pleasant evening.

The same this morning; about an hour after waking up our puppy tends to exhibit the same behaviour, so again he went straight to his pen for a (shorter) calming down period, and is now a gorgeous boy. Thank you for training me and we will stick at it! 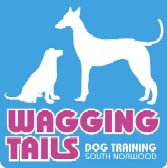 Vera Marney
Diss, Norfolk, United Kingdom
WAGGING TAILS Dog Training is run by Vera Marney BSc, MAPDT and is a dog training school with a difference. It's not just walking round in circles to heel and the odd sit and down thrown in. We do pet obedience, agility, rally-o and lots of other fun things to keep those busy doggy brains and the owners happy! Vera has trained dogs for 30 years, has done behaviour work for around 20 years, has an honours degree in canine behaviour and training and is a member of the Association of Pet Dog Trainers UK (00791). She also owns four dogs herself of different breeds.